In the shadow of Mt. McKinley

Since 1934, some kind of visitor facility has existed along Eielson Bluffs. The first facility was a tent camp called Camp Eielson, and named after pioneer Alaskan aviator Carl Ben Eielson. In 1960, after four years of design and construction, an interpretive center and rest stop opened and replaced the tent camp.

Sporadic expansion and rehabilitation occurred in the decades after the 1960 opening, but visitor use outgrew the small center and, in 2004, the old Eielson Visitor Center closed for four years of demolition and sustainable reconstruction. The center re-opened in 2008.

Regardless of the structure, the area has always been famous for its amazing views of Mt. McKinley on clear days, and it is not uncommon to see wildlife on the surrounding hillsides. 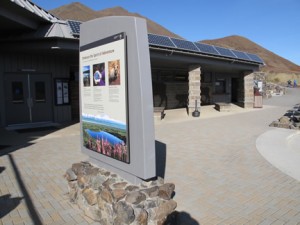 As one of the leaders in sustainable design, the National Park Service made a priority of re-modeling Eielson Visitor Center using sustainable building methods and materials.

Building into the tundra 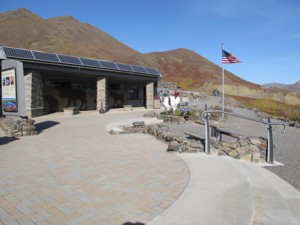 A main goal of the project was to design a low-profile building that blends into the landscape. The steep slope enabled the designers to partially bury the building, which visually screens the structure from the Park Road. The roof is literally “green,” as tundra mats salvaged from the construction of the site were relocated to planters dispersed on the roof terrace. These camouflage the roof deck, helping it blend into the landscape. The green roof also assists in storm water run-off reduction and thermal energy conservation.

The planning and construction of Eielson included strategies such as maximizing natural daylighting, selecting energy-efficient heating / venting systems, the use of renewable energies to power the building and thoughtful selection of recycled and locally produced.

In the past, the remote location of the center spurred the park to implement various renewable energy strategies at the site, including a hybrid generator system with photo-voltaic panels and a battery bank. Information gained from analysis of this and other strategies led to expanding the solar panels and battery bank, installing a solar hot-water heating system for the restrooms, and constructing a small hydroelectric system in a nearby stream.

What there is to do

There is a small gallery of art inspired by Denali’s wilderness and wildlife in this visitor center. Meanwhile, the views from Eielson are likely to inspire you, particularly on a clear day, when Mt. McKinley dominates the view to the southwest.

Park rangers at Eielson are ready to answer your questions, provide information, or just spend a few minutes chatting as you take a break from the bus. Several ranger programs are offered through out the day from Eielson.

There is a 3-D model map of Mt. McKinley and the surrounding Mountain Range that gives visitors a feeling of the vastness of the land they are in.

Two trails exist at Eielson, one a short loop and the other a strenuous path up Thorofare Ridge. You are also welcome to hike off-trail.

This site uses Akismet to reduce spam. Learn how your comment data is processed.

Due to the Denali Park Road closure at mile 43, we are unable to operate Kantishna Wilderness Trails this season.